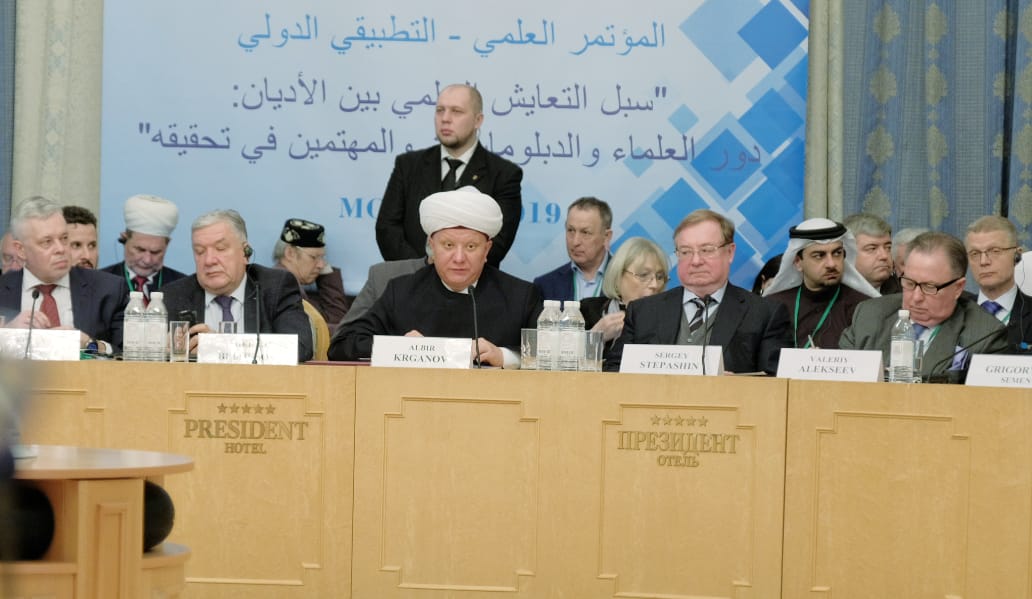 In the name of Allah, the Most Gracious, the Most Merciful!

Dear participants and guests of the international conference!

Letme sincerely welcome the high forum on behalf of the Organizing Committee and thank you for accepting the invitation and participating in our event.

First of all, I want to say that all of us were shocked by the recent tragic events occurred the other day in the New Zealand mosques. Let me announce a minute of silence in mourning of our innocently killed fellow believers, as well as people of other religions innocently killed in different parts of the world.

Thank you. Dear friends, we begin our conference with a minute of silence to mourn the innocent people killed in an act of atrocity that has no excuse and forgiveness. I hope that our forum, which has brought together representatives of world religions from 39 foreign countries and various regions of Russia at this round table, will express its negative attitude to terrorism and to attempts to use religion to justify murder and violence, and will unite the world community and all people of good faith in the fight against terrorism.

Dear participants and guests of the conference!

The stated topic of our conference is very relevant. In modern conditions, the role and importance of the religious factor and of traditional religions’ positive impact on all spheres of human activity and the spiritual and social life of society are increasing. In this regard, Russian President Vladimir Putin noted: “Despite all the differences and particular features, Orthodoxy, Islam, Buddhism, and Judaism rely upon common basic moral, ethical, and spiritual values: mercy, mutual aid, truth, justice, respect for elders, and ideals of family and labor. These values ​​are irreplaceable, and we need to strengthen them. I believe that the state and society should welcome and support efforts of traditional religions of Russia in the system of education and awareness raising, in the social sphere, and in the Armed Forces.”

Preserving and strengthening inter-ethnic and inter-religious peace and harmony in society is a topical issue. In this regard, politicians, government officials, diplomats, religious and public figures, researchers, believers themselves, and the general public should be aware of their responsibility.

We are all concerned about the growing activity of radical destructive sects, the level of xenophobia and Islamophobia, the spread of extremist ideology, and the attempts to use religion to justify extremism and terrorism, we are concerned about persecution of Christians in the countries of the Middle East and North Africa, attempts to split Orthodoxy due to opportunistic political and other considerations and motives, as well as about the processes of de-Christianization of the spiritual and moral fundamentals of social life within the framework of the Western civilization, and about many more other issues.

The challenges faced by traditional religions pose undoubtedly a threat to the entire world community.

The centuries-old experience of peaceful coexistence of people representing different nationalities and religions in Russia is interesting for research and application. The historical experience of intercultural and inter-religious interaction and peaceful evolution is the historical heritage of Russia and is relevant for other countries.

Today, we all need a peaceful, undisturbed, sustainable development and it is absolutely clear that there is no alternative to the further process of peaceful coexistence of cultures and religions and to the development of their dialogue and cooperation. His Holiness Patriarch Kirill of Moscow and All Russia rightly noted: “The concept of peaceful coexistence and partnership of different cultural models, none of which should claim universality or suppress others, can be an alternative to the idea of a “melting pot” of civilizations which is offered to us by the West and destroys traditional religious values. Commitment to rights and liberties should be coupled with respect for the moral principles and the national and religious traditions of peoples”. One should only agree with these words and support them.

The above and other issues of strengthening the interfaith peace and concord in modern conditions will be the subject of consideration and discussion at our forum today.

I am pleased to highlight once again that our conference has gathered foreign guests from 39 countries representing governments, religious organizations, and well-known foreign centers of humanities and theological science. Among our guests, there are also representatives of governmental authorities, civil society institutions, representatives of religious organizations and research and expert communities from various regions of Russia. Various problems arose during preparations to our forum. For example, some experts wondered why religious organizations would initiate participation of diplomats and public figures in such a seemingly religious event. In reply, one can say that all of God’s Messengers and Prophets were, by the very fact of their mission, diplomats and public figures and always were among the people. In Russia, there is a saying: “Doing good deeds is speaking with the Lord.” And it is our sacred duty before God, the state, and the people to help and lead works of mercy, and to treat all our guests here as our benevolent allies.

Let me declare the International Research and Practical Conference “Ways to achieve interreligious peace: the role of theologians, diplomats, and public figures” open.