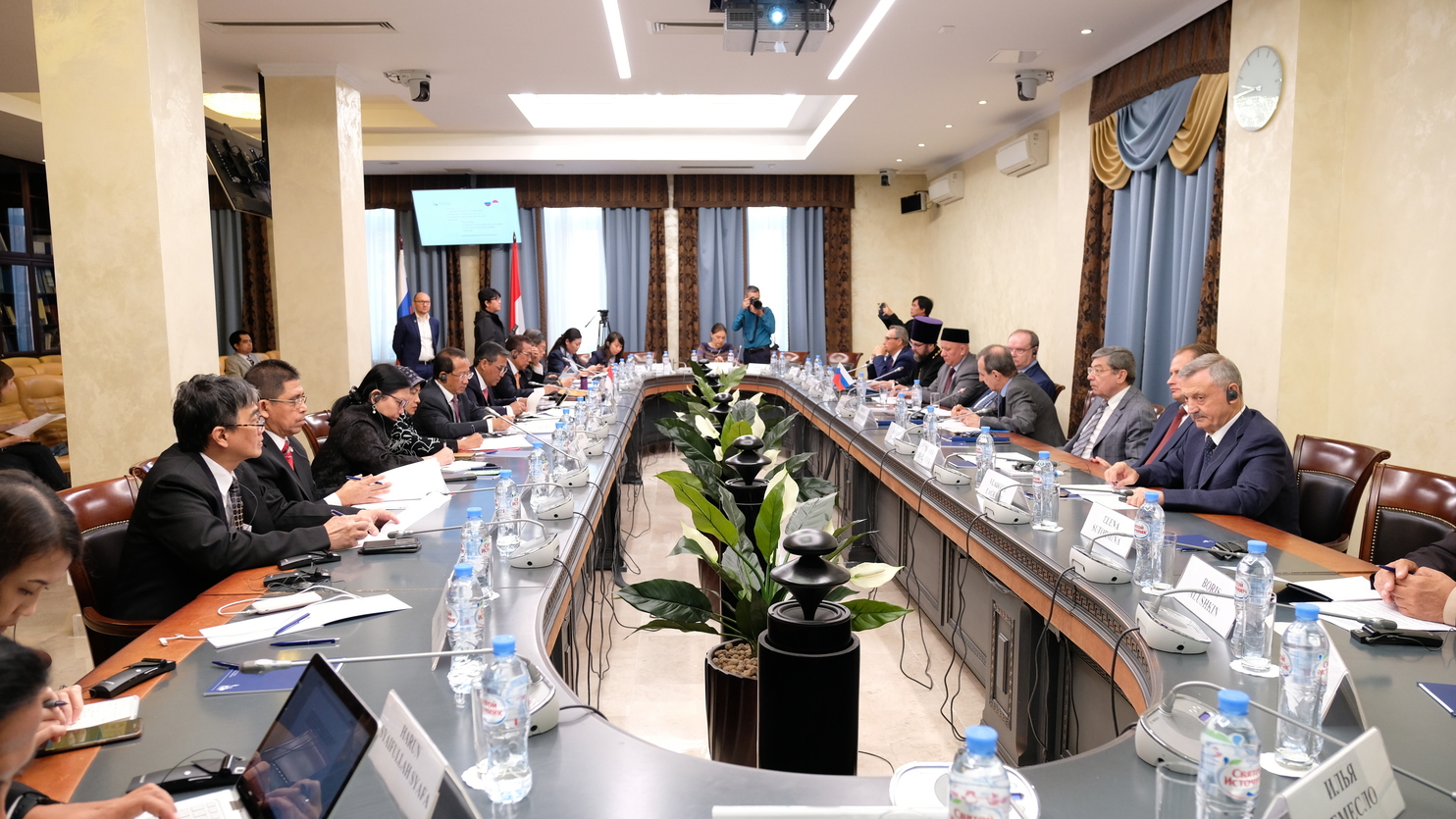 International cooperation in sharing experience of interfaith and interethnic mediation, cross-media dialogue between Russia and Indonesia brings its results - the format of Russian-Indonesian projects and cooperation isexpanding. Another step in this direction was the round table "Creating a strong state and civil society on the way to achieving interfaith harmony" in the second Indonesian-Russian interfaith and cross-media dialogue held in the Civic Chamber of the Russian Federation on September 14.

At the heart of the international discussion were topics of tolerance, religious harmony, countering extremism, the principles of soft power in the context of the fight against terrorism, radicalism, and the role of the media in combating destructive information outflows, false news in the realities of modern open society and the era of social media and globalization.

"Freedom of religion is the most important factor in preserving peace in the world and the parameter of assessing the degree of freedom in a particular society," Albir-hazrat Krganov, mufti of the Spiritual Assembly of 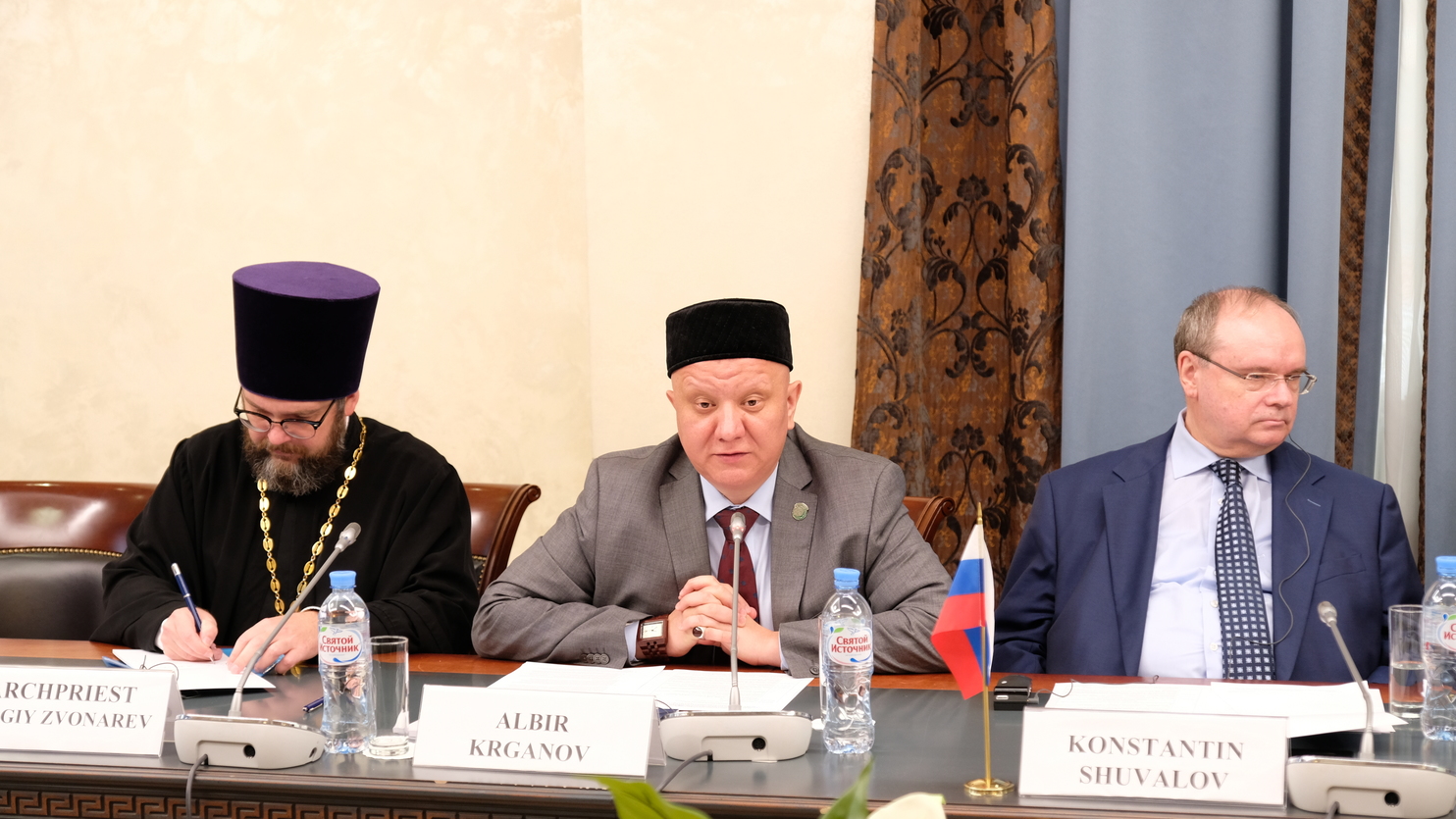 Muslims of Russia, member of the Civic Chamber, delivered a welcoming speech. "Currently, freedom of religious beliefs of the majority of the population of the world is under increasing pressure. Communities suffer because of their religion. Religion is increasingly involved in the political dimension, these issues should not become levers of pressure and interference in the internal affairs of states, and manifestations of terrorism and extremism should be considered in isolation from religious, racial and cultural affiliation."

Both the Russian and Indonesian sides noted the importance of the sovereignty of state policies, the preservation and development of traditional cultures and religions, the harmfulness of outside interference, in which religious differences are used to incite hatred and social tension. Deputy Secretary of the Civic Chamber of the Russian Federation Sergey Ordzhonikidze noted the uniqueness of Russia as a country where representatives of the most diverse nationalities and religions have the maximum rights and freedoms.

Chechep Heravan, Head of the Directorate General of Information and Public Diplomacy of the Ministry of Foreign Affairs of the Republic of Indonesia noted the special role of the media, religious organizations and their leaders in maintaining the harmony of multiculturalism and interfaith peace in the Republic of Indonesia. Questions of freedom of speech and freedom of religion were also raised in the speech by Rukhaini Dzukhayatin, Special Advisor to the President of the Republic of Indonesia on International Religious Issues. The representative of Indonesia spoke about the corruption component in the development of inter-confessional discord, attempts to counteract modernization by officials who are losing their personal benefits. 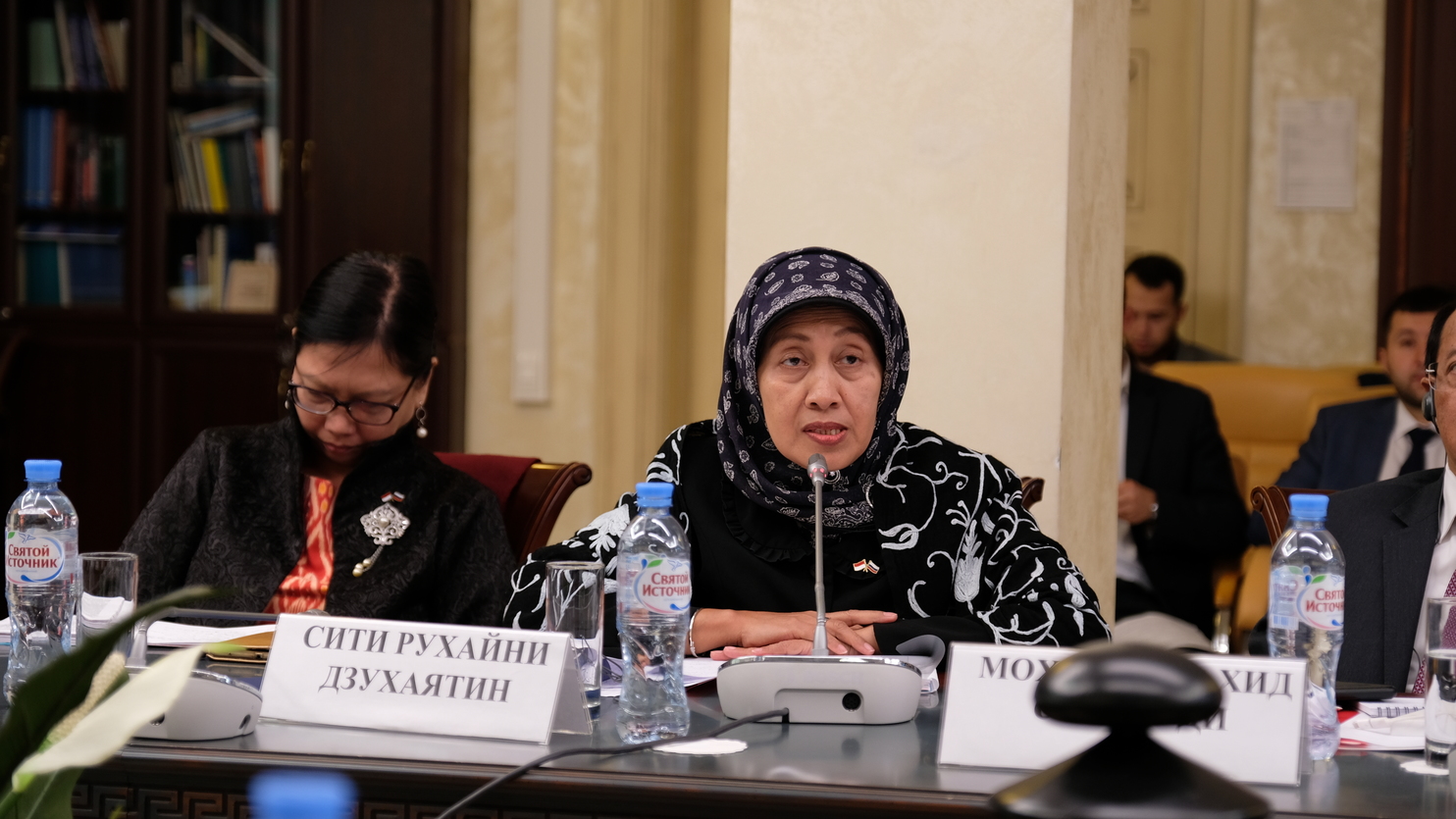 The problem of the lack of a sense of national unity among persons susceptible to extremism was touched upon by the chairman of the Commission on Harmonization of Interethnic and Interreligious Relations of the Public Chamber, Iosif Diskin. According to the expert, the difficulties with socialization, which are fueled by the destructive information impact of the "coalition of fear traders", the media, earning ratings on frightening stories, lead to disorientation of people. On the traditional religions of Russia and Indonesia, their reports were voiced by Gomar Gultom, Secretary-General of the Union of Indonesian Churches, Philip Kuntjoro Vijaya, a Buddhist religious figure, Sergei Zvonarev, Secretary for Foreign Affairs of the Department for External Church Relations of the Moscow Patriarchate.

Zulfiani Lubis, Editor-in-Chief of the IDN Times portal, spoke about the role of the media in interethnic and inter-confessional peacemaking in Indonesia. In the Republic of Indonesia, as in Russia, all the big turns are gaining not only the Internet media, but the dissemination of information in social networks. In Indonesia, specialized seminars and trainings are held for journalists and information specialists. Natalia Zakharova, an international journalist and expert of the Gender Policy Center, told about the diversity of Russian media and the state policy of propaganda of tolerance ideas: "Personal values ​​of a person are determined by the culture and norms of the surrounding society, the values ​​of small contact groups with which he identifies, process of identity formation ". An expert on the example of the Republic of Dagestan described the suppression of religious identity in the Soviet period and its restoration to the post-Soviet, pernicious impact of the corruption component on the formation of a common civil identity in the North Caucasus republic and the steps taken by the new Republic of Dagestan leadership to balance the social and ethnic situation by competition for the replacement of posts for professional qualities.

The event presented the results of monitoring the situation in the sphere of religious freedom in the world for the period from November 2017 to July 2018, conducted by experts of the Russian Association for Religious 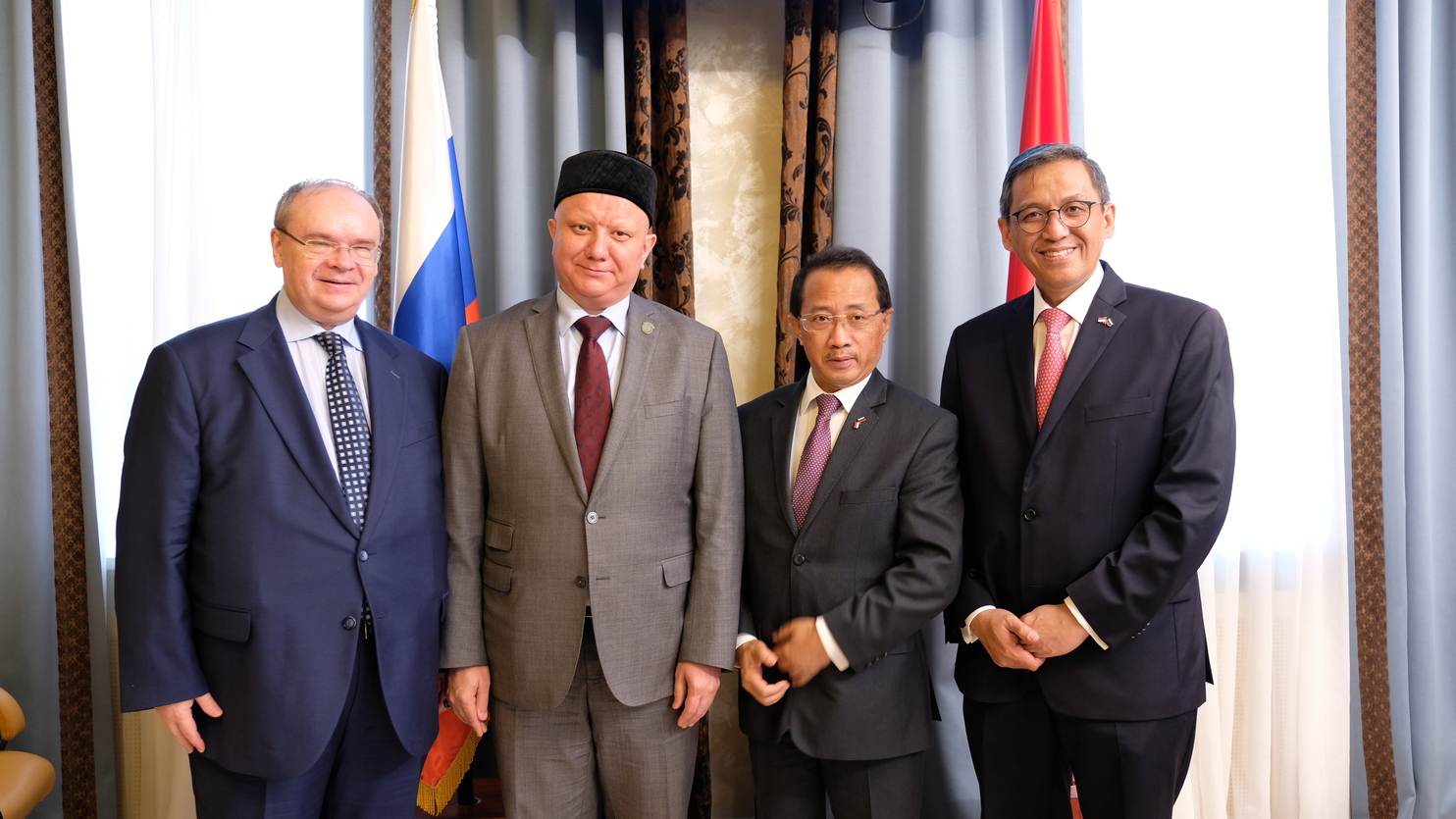 Freedom (RARS) based on open sources. The total number of incidents of violations of the right to freedom of conscience and religion revealed during the reporting period is at least more than 600, and, considering the number of facts of religious phobia and the propaganda of secularism, more than 900. During the reporting period, RARC recorded 386 cases of physical violence and 228 cases of discrimination on a religious basis. The total number of victims of the violation of the right to freedom of religion reached 4,400 people, including 2,252 people were killed. Participants of the event received copies of the report.

The Indonesian delegation noted the high level of expertise of the event. The final document of the Government of the Republic of Indonesia and the Russian Federation signed on the results of the round table confirmed their readiness for the further development of close and friendly bilateral relations by organizing and supporting initiatives to hold various events in the format of dialogue.

To implement the agreements reached within the framework of bilateral dialogues, the Indonesian side expressed its readiness to provide scholarships to several Russian students for teaching Islam at the Jakarta Islamic University named after Sharif Hidayatullah (Syarif Hidayatullah State Islamic University, Jakarta) to invite representatives from Russia to participate in 2019 in the International Interconfessional Youth Camp and in the Youth Camp for future religious leaders.

The Russian side welcomed and highly appreciated the above-mentioned proposals of the Indonesian side.

The sides agreed that the next Interreligious and Cross-Media Dialogue will be held in Indonesia, the terms of its holding will be coordinated through diplomatic channels.