Centuries-old traditions of friendship and cooperation between Russia and Uzbekistan: to preserve, strengthen and multiply 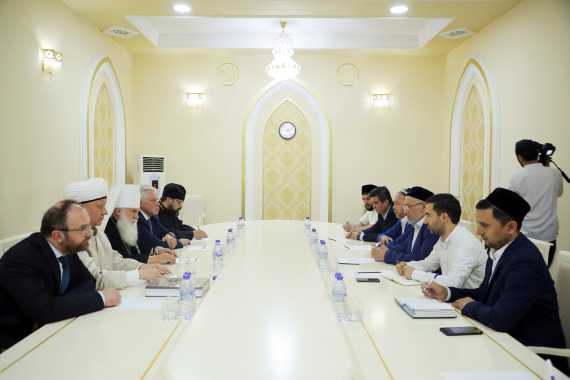 In early June, at the invitation of representatives of Uzbekistan, a delegation of the Russian Federation, which includes the Head of The Spiritual Assembly of Muslims of Russia, Mufti of Moscow, member of the Public Chamber of the Russian Federation Albir Hazrat Krganov, visited the Republic of Uzbekistan. Within the framework of the visit, a round table "The role of Orthodoxy and Islam in the harmonization of the life of modern society" was held in Tashkent, a number of important meetings was held in the Muftiate of the republic.
The delegation, with the blessing of Chairman of the Moscow Patriarchate's Department for External Church Relations, Metropolitan Hilarion of Volokolamsk, included Priest Dimitri Safonov, Secretary of Department of External Church Relations for Interreligious Relations, Executive Secretary of the Interreligious Council of Russia, Deputy Chairman of the Synodal Department for Church-Society and Media Relations Vakhtang Kipshidze and Chairman of the All-Russian public organization of the Russian Association for the Protection of Religious Freedom Sergey Melnikov. The forum was organized by Metropolitan Vikenty of Tashkent and Uzbekistan, head of the Central Asian Metropolitan District of the Russian Orthodox Church. The Muftiate of Uzbekistan was represented by Deputy Chairman of the Department Ibrohim Inomov. The conference was also attended by representatives of public organizations of Uzbekistan, the Babakhanov Muftis Foundation, an MP of the Supreme Council and diplomats of the Russian Embassy. The Rector of the Russian Islamic Institute, Chairman of the Council for Islamic Education R.M. Mukhametshin and Chairman of the Commission of the Public Chamber of the Russian Federation on the Harmonization of Interethnic and Interreligious Relations V.Y. Zorin gave speech remotely.
After the forum, the Russian guests together with the Metropolitan visited the Office of Muslims of Uzbekistan. At the business meeting, the Muftiate of Uzbekistan was represented by First Deputy Chairman of the Board of Muslims of Uzbekistan Khomijon Hazrat Ishmatbekov, Deputy Chairman of the Board Ibrohim Hazrat Inomov, Deputy of Mufti of Uzbekistan Utkir Khasanbayev, Head of the International Department of the Committee on Religious Affairs of the Republic of Uzbekistan Shavkat Hamdamov and employees of the Department.
The parties discussed in detail interreligious efforts aimed at preserving traditional moral values, countering extremism and destructive propaganda of radical ideas among young people.
Metropolitan Vikenty of Tashkent narrated about the experience of dialogue with the Islamic community of Uzbekistan during his ministry in the Republic, noting the attention paid to strengthening interreligious harmony by the country's leadership. Deputy Chairman of the Department of Muslims of Uzbekistan Ibrohim Hazrat Inomov pointed out that the Department is very grateful to Metropolitan Vikenty for his active position in maintaining dialogue with Muslims and he enjoys great respect both among the leaders of the Muslim community of Uzbekistan and among believers. He thanked the muftiats of Russia, among which the Spiritual Assembly of Muslims of Russia is actively cooperating with the Muslims of Uzbekistan.
The head of the Spiritual Assembly of Muslims of Russia, Mufti of Moscow Albir Hazrat Krganov noted that the unification of the joint activities of Orthodoxy and Islam in the post-Soviet space has an important role in countering aggressive secularism, preserving and protecting traditional values, strengthening stability and peace in society, culture and customs of the peoples of the two countries. The consistent policy pursued by the leadership of the Russian state to harmonize interreligious relations increases the recognition and trust in Russia from the countries of the Islamic world. Albir Hazrat also drew attention to the extensive work carried out by the Office of Muslims of the Republic of Uzbekistan in the development of interreligious dialogue not only within the Muslim Ummah, but also in cooperation with other traditional religions. The Web-site of Office of Muslims of Uzbekistan has recently become popular in Russia, and it is published in Russian language. He also mentioned with gratitude the Koran Hafizs who visited Moscow to conduct the tarawih prayers of the Holy Month of Ramadan. There is no a single follower of extremist and extreme views among the graduates of the famous Bukhara madrasah Mir-i-Arab, which indicates a verified model of Islamic education in Uzbekistan, the mufti noted. In this regard, we are interested in cooperation on education issues and we would like to invite teachers to the Zainull Ishan Rasulev Madrasa in Moscow.
During the fruitful communication, the religious and cultural diversity of the Uzbek people were mentioned. The sides noted with satisfaction the strengthening of ties in the field of religion and culture between the two countries.
Following the meeting, the parties exchanged proposals on further steps to advance in resolving issues of common interest and agreed on a format for practical interaction in all areas of cooperation between Uzbekistan and Russia, strengthening mutual respect, religious tolerance and interethnic harmony between peoples.
The Muftiate of Uzbekistan also noted an important positive decision to accept students from Russia to Islamic educational institutions of Uzbekistan.
During the visit, the guests visited the cities of Samarkand and Bukhara. Mufti Albir Hazrat attended Friday prayer at the Islam Ota Mosque in Tashkent and the Sheikh Naqshbandi Mosque in Bukhara.

Press Service of The Spiritual Assembly of Muslims of Russia