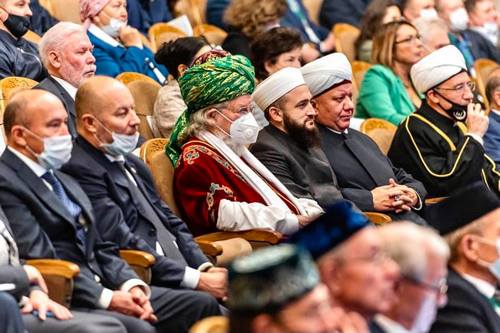 The Head of the Spiritual Assembly of Muslims of Russia, Mufti of Moscow, Albir Hazrat Krganov, participated in the plenary session of the National Assembly of the World Tatar Congress, which was held on September 24 of this year in Kazan.

The National Assembly was founded by the World Tatar Congress. About 500 active representatives from the Republic of Tatarstan and 70 regions of the Russian Federation and foreign guests participated in this large-scale event.

The head of the SAMR, Albir Hazrat Krganov, also admired the crucial role played by the World Tatar Congress towards organizations in Russia and outside the country.

“Today we need unity and solidarity in the implementation of a consistent course for the preservation, consolidation and further development of our national, cultural and religious values, the original foundations of people's life,” said Mufty.

As a result of this event, a special resolution was issued, in which the participants emphasized their common position in the pursuit of preserving the Tatar national identity, their native language and their unique culture.

Previously, the year 2021 was declared in the Republic of Tatarstan as the year of mother tongues and Tatar national unity.