Prospects for Future Cooperation between the SAMR and the Institute of Russian history of Russian Academy of Sciences. 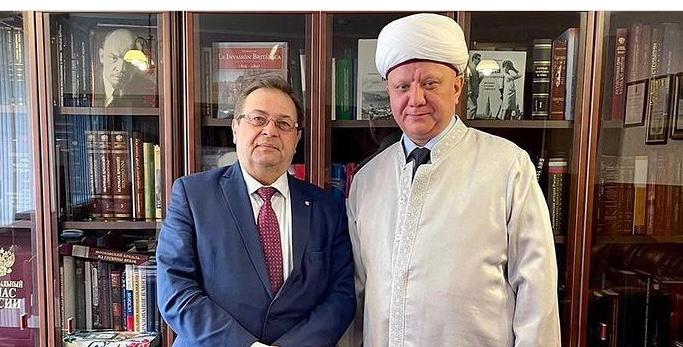 Head of the Spiritual Assembly of Muslims of Russia, Mufti Albir Hazrat Krganov held a meeting with the director of the Institute of Russian History of Russian Academy of Sciences Yuri Petrov. During the meeting, the parties discussed issues of strengthening cooperation in the field of military-patriotic education and enlightenment of youth, preserving national traditions, and developing interfaith dialogue.

Both sides were unanimous in their opinion on the need for a precise and careful approach to historical processes, highlighting the role of interreligious and interethnic relations in the public and information space.

The meeting took place in a warm and friendly atmosphere. Albir Hazrat and Yuri Petrov thanked each other for the fruitful conversation and expressed hope for further cooperation.

The Institute of Russian History of the Russian Academy of Sciences is considered to be a leading scientific institution that deals with studying fundamental problems of Russian history from the period of Ancient Rus to the present.

Today the staff of the Institute makes up more than 160 researchers, mainly doctors and candidates of sciences. Among the scientists of the Institute there are full members and corresponding members of the Russian Academy of Sciences and other academies and scientific societies.

Every year scientists of the Institute publish dozens of monographs and collections of articles on general and specific problems of Russian history, prepares and publications of unique historical sources.